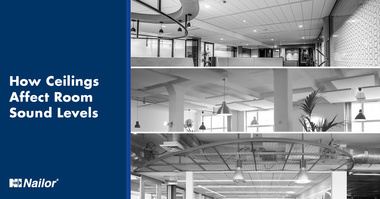 When a room has a full ceiling stretching from wall to wall, the ceiling isolates the room from the area above the ceiling. Frequently that space above the ceiling is used for the return air path to the air handler. It is also used to mount mechanical equipment, plumbing, electric supplies and lighting. The open space is a separate space from the occupied area below. As such, sound that is generated in the return plenum spreads throughout the plenum and produces an area sound source that emanates across the entire ceiling somewhat evenly into the space below. AHRI Standard 885 describes how the sound from the mechanical equipment is affected as it enters the occupied space. Sound readings in the occupied space will be nearly constant across the entire floor area in the room.

When the ceiling is not present, the mechanical equipment sound does not enter the occupied space in the same manner as when the ceiling is present. The sound source becomes a point source and is mostly affected by distance between the source and the receiver. It can also be reflected from various equipment in the upper part of the room and directed toward one or more areas in the occupied space. The room volume increases since there is now only one overall space. AHRI Standard 885 has a procedure for predicting sound levels in the occupied space for this condition; however, it has proven to be very optimistic. Measured attenuation values in each octave band vary greatly from the predictions made with and without the ceiling. Efforts to achieve acceptable NC values in the occupied space without a ceiling usually will cause the mechanical equipment to be oversized to reduce the noise generated. Additionally, the equipment sound levels tend to migrate toward higher octave bands making the equipment noise additive to the diffuser noise. Sound readings in the occupied space will vary greatly across the entire floor area in the room, generally dissipating with increasing distance from the equipment.

Cloud ceilings or floating ceilings are partially suspended ceilings in the room. They do not extend from wall to wall. Generally, they are used to hide the mechanical equipment in the upper part of the room or to expand the height of the room near the perimeter glass to provide a larger view through the perimeter glass and simulate a higher and more open room. In the very best conditions, the room NC levels will be no better than what they would be with no ceiling. Some areas can have greater noise levels where the noise from above the ceiling is focused on a particular spot or area in the occupied space.

Use great care when attempting to predict room noise levels with partial or no ceilings. The values will be very different from that of a space with a full ceiling.