Home » Corporate » News » VAV System Design: What is your style?

VAV System Design: What is your style? 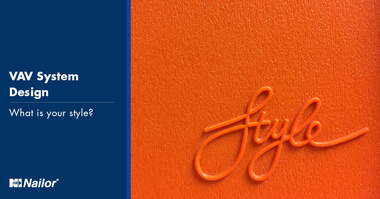 The Houston, Seattle, and Washington DC markets largely specify systems that utilize series fan-powered terminal units in all zones. Dallas and Portland, OR, specify parallel fan-powered units on the exterior with single duct units in the interior. The equipment and configuration of selected terminal units appear to be a matter of style. There are many reasons why different areas could have different design standards. Regardless, analyzing why you would select one style over the other could provide some value.

Terminal units are used within a Variable Air Volume (VAV) System to control the airflow and temperature delivered to a zone. Single duct, parallel fan-powered, and series fan-powered units are connected to an air handling unit (AHU) that supplies the terminal units with cooled and dehumidified air.

The single duct terminal unit consists of a flow sensor, actuator, damper, and in some cases a heating coil. When the controlling thermostat calls for additional cooling, the actuator will start to open the damper to provide more cool air to the room. During this operation, the terminal unit relies on airflow delivered by the AHU. During heating, the single duct unit operates in the same way, but a heating coil reheats the air to maintain the space set point.

Parallel FPTUs act as a single duct box during cooling. During heating, the primary damper closes to the minimum ventilation rate, and the fan/heating coil starts. The fan pulls air from the plenum to make up the required airflow to satisfy the heat in the space. The Parallel unit needs pressure from the air handling unit, like the single duct, to serve the space during cooling.

With the increase in energy efficiency in lighting and equipment, the heating loads from equipment in the space have dropped dramatically. In many cases, this allows the minimum ventilation rates for interior zones to over-cool the room. Interior zones are sometimes equipped with heating coils to maintain occupant comfort.

The two system styles that have emerged are Parallel + Single Duct and Series Units.

With these systems, the parallel units cover the exterior zones while single duct units serve the interior. These two unit types work together well because they require similar pressures from the AHU to operate.

When designing a system with series units, use them on both interior and exterior zones. Because they require little to no pressure at the inlet to operate, using series units throughout the system allows the designer to reduce the required pressure from the air handling unit, sometimes up to 1" w.g. The result is either a smaller fan and motor (saving $) or the fan and motor to operate at a slower speed (saving $).

The use of series units on the interior provides another benefit. When the room is just slightly over-cooled, the fan can increase and induce more plenum air into the airflow. Just the increase in plenum air can warm the airflow enough to satisfy the demand of the space, reducing the use of the heating coil.

If the designer pairs series units with single duct units, most of this benefit is lost because the AHU pressure would have to increase to accommodate the requirements of the single duct units.

Pros & Cons of Each Style

A study performed in conjunction Texas A&M, located here, looked at how the decision on what type of fan-powered terminal units used could affect the overall building energy load.  The study compared EC Motor Series FPTUs with constant volume and variable volume controls, as well as Parallel Units with EC Motors to a baseline of PSC series units. The results were impressive, utilizing variable volume series units with EC Motors saved the building (depending on location) 6-10% of total HVAC energy costs.  Using Parallel units would save 9-10% in an ideal world where the unit didn’t leak, which is never the case.  The study found that most units leaked 5-10%, which reduced their energy savings to -1-6%. 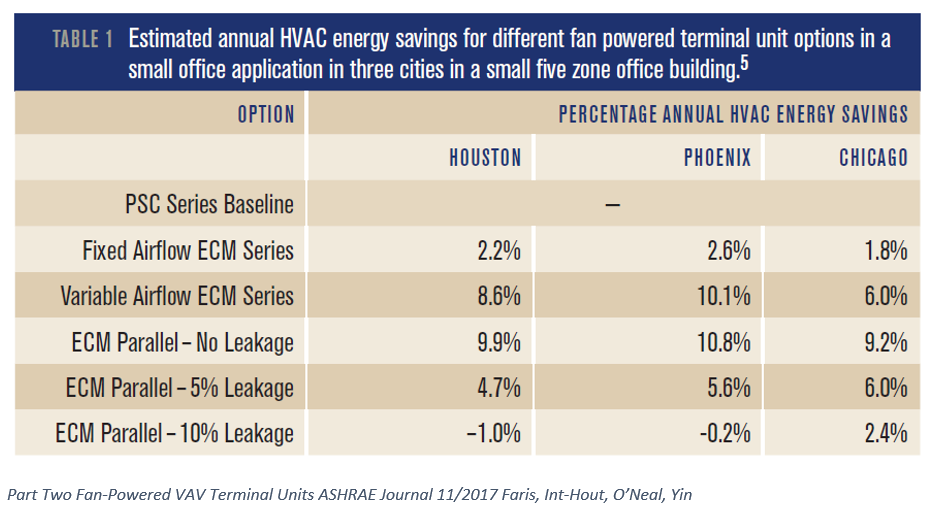 The selection of terminal units can have a large impact on how efficient the overall HVAC system performs. If you have any questions regarding the different styles or about HVAC systems in general, contact me at mcrump@nailor.com.