HVAC Ins & Outs with Dan Int-Hout - What is wrong with ADPI? 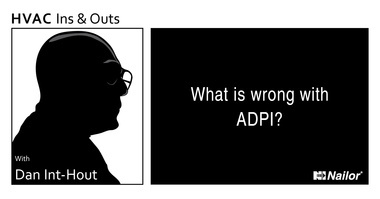 The Air Diffusion Performance Index (ADPI) was developed at Kansas State University in the 1960’s as an ASHRAE project to assist in understanding air diffuser layout and performance. The basic concept is that the ratio of the discharge air projection, defined by the diffuser’s throw, and the separation distance between air outlets, could be used to define the resulting air mixing in a space.  The percentage of points in the “occupied zone” in a space that meet a criterion for acceptable “draft temperature” determined the ADPI. An ADPI of 80% was determined to be a minimum acceptable value for most of the occupants in a space, with certain assumptions regarding the uniformity of activity and clothing levels of the occupants.

The draft temperature was calculated from the measured airspeed at a point, and the temperature at that point, compared to the average in the rest of the space. It was essentially a mini wind chill factor, with the space average temperature and an air speed of 30 fpm being neutral, and the calculated draft temperature would be 0 in that case.  An increase in point temperature above the room average, or an air speed less than 30 fpm, would raise the calculated draft temperature, a lower temperature or higher air speed would lower it, with limits set between -3 and +2 for acceptability. Points outside this range were not included in the percentage of acceptable points. Additionally, airspeeds greater than 70 fpm were also not included.  The acceptable range was based on thermal comfort research conducted over many years and considered typical indoor metabolic rate (activity) and clothing levels.

The ADPI is predicted as a function of room load and the discharge patterns of several types of air outlets, and was published in the ASHRAE Handbook of Fundamentals, where it has been available for over 50 years. Using the isothermal throw and diffuser separation distance, one could enter the table for a given diffuser type, at the nominal design space load, and predict the ADPI.  Several manufacturers have developed software to perform this calculation for their air outlets.

ADPI can be measured, of course. ASHRAE Standard 113, developed in the early 1980’s is a method of test for measuring room air motion and temperature, and the data can be used to calculate ADPI. The requirements for control of discharge temperatures and simulated loads makes tests outside the laboratory difficult, if not impossible.  While it had been done to validate GSA requirements in full scale mockups in tests conducted in the late 1970’s, we know of none done since then. Many laboratory tests have been conducted by several manufacturers, always under carefully controlled conditions, validating the ADPI predicted performance.  An ASHRAE Research project was conducted at UT Austin to both validate the existing data and to extend the calculations to the much lower loads experienced in today’s interior spaces.

The ADPI calculations, however, are limited in scope. For ceiling diffusers, where it has been most useful, it assumes a suspended ceiling about 9ft above the floor, an open rectangular or square space, and multiple diffusers centered in a definable area. It is not applicable to perimeter spaces where diffusers are usually offset towards the window, irregular-shaped spaces, or spaces without a suspended ceiling. These are, of course, the spaces where it would be most useful.

A single diffuser in a closed room likely won’t be able to be analyzed using ADPI as the diffuser jets will usually wash the walls, making a “separation distance” less than useful.    The minimum acceptable diffuser airflow rate may be able to be determined using an ADPI analysis, which is mostly independent of many installation details but still assumes installation in a suspended ceiling. As we are seeing more and more spaces being designed without a suspended ceiling, ADPI is no help there.  And finally, we almost never see a specification from a design engineer calling for an ADPI calculation, likely for all the above reasons.

So, what to do? Jet mapping seems to be the most practical layout tool for the design engineer. Jet collisions where the colliding supply air jets from two diffusers enters the occupied space with an air speed greater than 50 fpm should be avoided.  The “occupied zone” is a space below 6 ft from the floor and more than a couple feet from a wall. At the perimeter, ASHRAE 62.1 indicates that in heating, the 150ft throw needs to project to within 4 ft from the floor to avoid ventilation stratification.  Failure to do this requires an increase in ventilation air to that zone.

Our observation of installed diffusers over the past many years is that there are often too many diffusers located too close together, see the picture below. While this may be better than too few too far apart, the result is often uncomfortable drafts at the mid-point between diffusers due to jet collisions.  Diffuser spacing calculations when there is no suspended ceiling are often quite difficult and often ignore the presence of acoustical “clouds” which we find have little actual acoustical benefit. The good news is that air outlets are often quite high in these situations and there is adequate space for the supply air streams to mix above the occupied space. 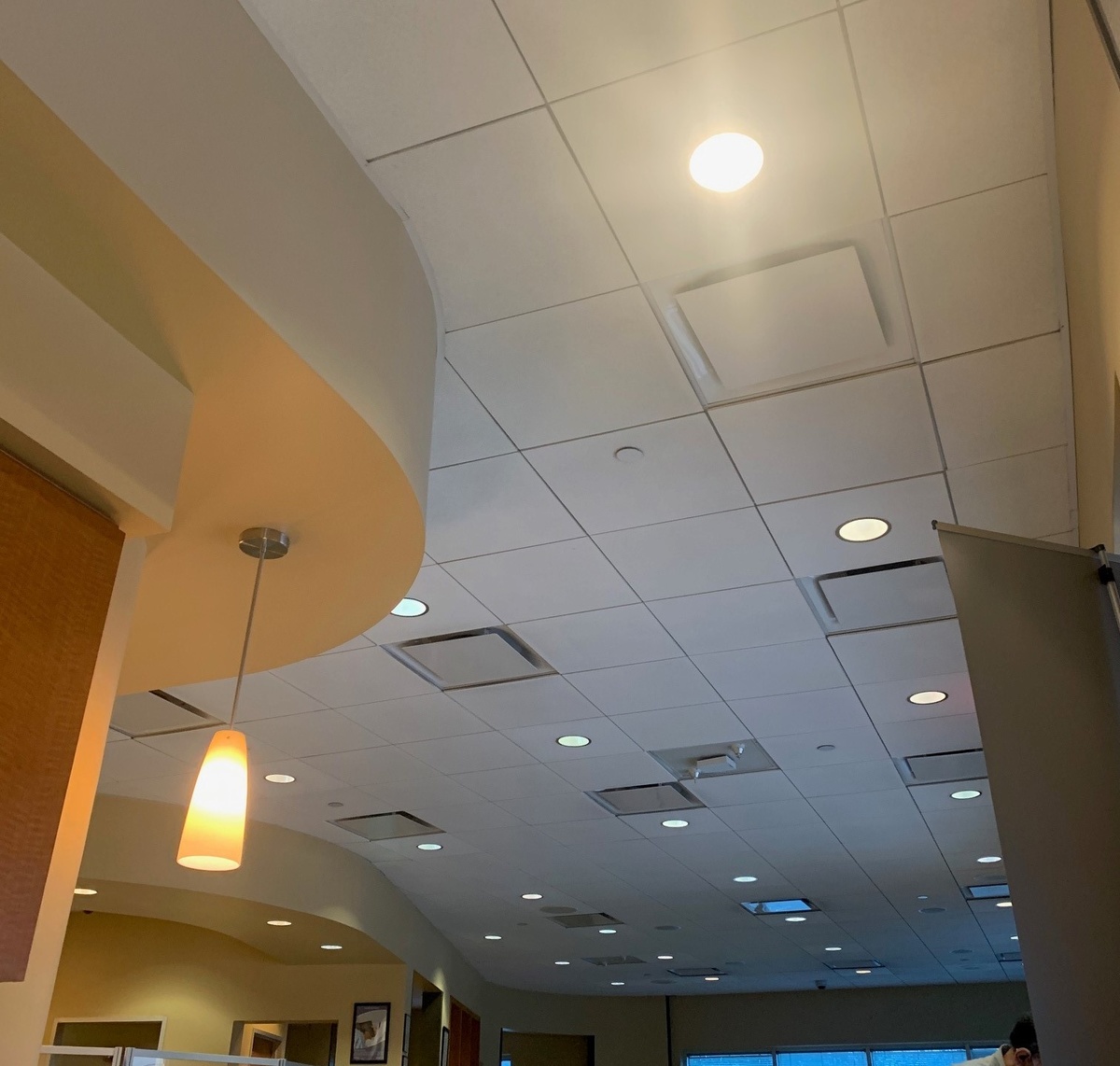 So while ADPI can help determine when a diffuser will be likely to develop “excessive drop “ (ie: dumping) at low flows, it is likely to be of less use in determining where to locate them.  Look at the diffuser throw data and do some jet mapping to see how far apart one should place them.