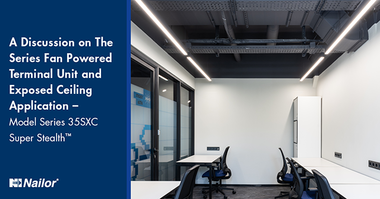 Architectural designs with open offices and acoustical tile suspended ceilings often have relatively low sound level requirements to achieve “acoustical privacy” for the occupants. The acoustical design goals include controlling occupied space noise levels so that it is neither so loud as to interfere with speech or too quiet so that all intermittent sounds become a distraction. Acoustical specifications have included several measures including Octave Band Sound levels, NC (Noise Criteria, based on a tangent maximum referenced to a chart of average human response), RC (Room Criteria, the average is 500 thru 2000 Hz bands and a letter representing high or low frequency predominance) and DbA (an “A Scale” weighted Log Sum in all bands).

The most common specification uses the NC criteria, typically not to exceed 35NC at space design loads.  The RC rating, with a requirement of RC 40N (neutral) has been shown to achieve an occupant preferred sound level.   When compared to the preferred sound range, however, the 35NC is too quiet in the mid frequencies, and too loud at both high and low frequencies. 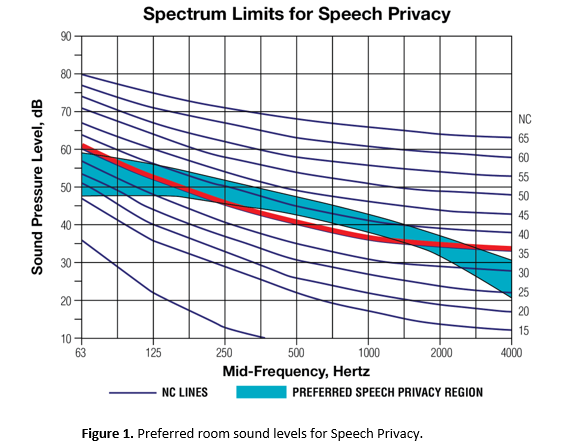 It turns out, however, that NC is far better in rating and comparing traditional fan powered HVAC equipment, which tend to peak (resulting in NC ratings) in lower frequencies. RC rating of most VAV equipment results in an R (rumble) rating masking the actual sound spectra created by the product and is seldom found as a device acoustical criterion in modern building specifications.

An RC40(N), where the sound level decreases 5dB per octave band, and intersecting the chart at 40 dB and 1000 Hz, is a good fit to the preferred occupant background sound levels. 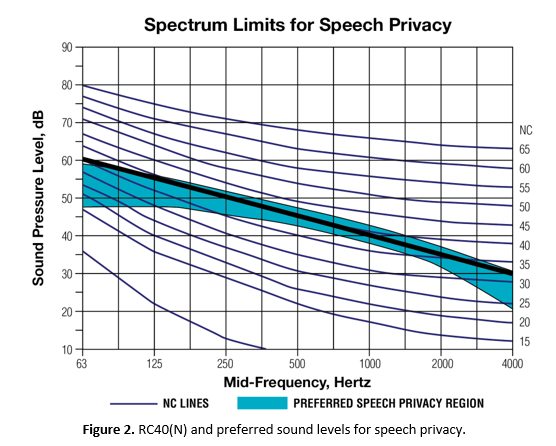 The architectural advantages of an exposed ceiling can be debated, but the fact is that they are a reality, often in prime spaces. Acoustical quality is part of the overall value of the space, and acoustical consultants are often employed to assist in achieving this goal. The removal of the acoustical tiles, however, has exposed design issues seldom considered in the past. The lack of an acoustical barrier between the occupant and overhead mechanical equipment has made it necessary to reconsider the selection criteria of noise making HVAC equipment.  It has been found that it changes the overall acoustical nature of the space in terms of sound transmission from sources in the space itself, sound reverberation times, and the effects on air distribution and thermal comfort.

When the suspended ceiling is not present to help in absorbing sound generated both in the occupied space and from above the occupied space, the resultant acoustical environment in the occupied space becomes more sensitive to sound generated by the mechanical equipment and other noise sources in the space above the occupied zone. According to the ASHRAE / AHRI RP755 research project, a suspended ceiling tends to create an “Area Source” from a point source if the noise source is located in the ceiling plenum space. This tends to both lower the overall level of sound measured throughout the space, and to spread the apparent source of the sound over a broad area.

The basis of acoustical design for mechanical equipment is octave band sound power measured in a Reverberation Chamber as defined by ISO, ASHRAE and AHRI standards. These chambers can develop sound power ratings for equipment isolated from associated ductwork and are the basis for certification of VAV products under AHRI Standard 880. The 35SST “Stealth” Series Fan terminal has been successful in providing superior acoustical environments with suspended ceilings on many projects based on witnessed tests in the ceiling mockup facility and follow up tests in actual spaces.    Comparison testing between suspended ceiling and without suspended ceiling in the same mockup revealed that the traditional frequency distribution of the space attenuation was quite different from the that observed with suspended acoustical tile ceilings.  While the critical frequencies for VAV terminals located in the ceiling plenum above a suspended ceiling tend to be in the 125 to 250 Hz bands, it was found that the critical frequencies, those that determine NC, or even RC ratings, are at higher frequencies when there is no suspended ceiling.  To optimize the sound frequency generation of equipment designed for exposed ceilings, different construction and attenuation characteristics needed to be developed.

Obviously, if a Fan Terminal can deliver more air and still meet the acoustical requirements, this would be a benefit to the building owner. To accomplish this, however, it was necessary to discover where the sound comes from. It had been known that about half the acoustical energy created by an operating Series (or Parallel) fan terminal comes out the induction port, the rest is radiated from the unit casing itself.  It was found that placing silencers on the induction port only reduced the total sound generation slightly, often by only 3dB in critical frequencies. Additionally, for silencers to become more effective, they tend to require a higher rpm on the supply fan to overcome the increased pressure drop created by the silencer. This increases the fan generated noise, and the power required, often making additional silencing counterproductive.

After several years of research and development, Nailor has designed a series fan terminal specially designed to operate in an exposed ceiling environment, the 35SXC (“Stealth XC/Stealth with exposed ceiling”). Utilizing a highly effective inlet silencer along with carefully integrated interior construction elements, a design has been created that has an acoustical profile that complements the observed space attenuation found with exposed ceilings.

Difference between 35SST and 35SXC

The result is an acoustical signature that closely follows the NC curves in several frequencies. The following graph illustrates the difference between the 35SST (“Stealth”) and the 35SXC (“Stealth XC”) in exposed ceiling mockup tests. 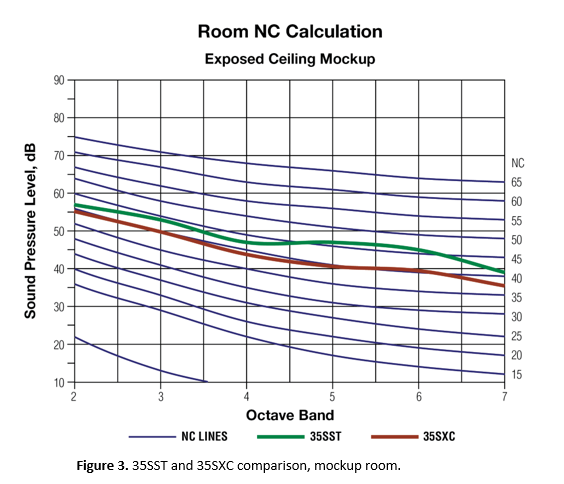 When plotted on an RC chart, the 35SST tends to be “hissy”, while the 35SXC results in a RC 42N under the same conditions. 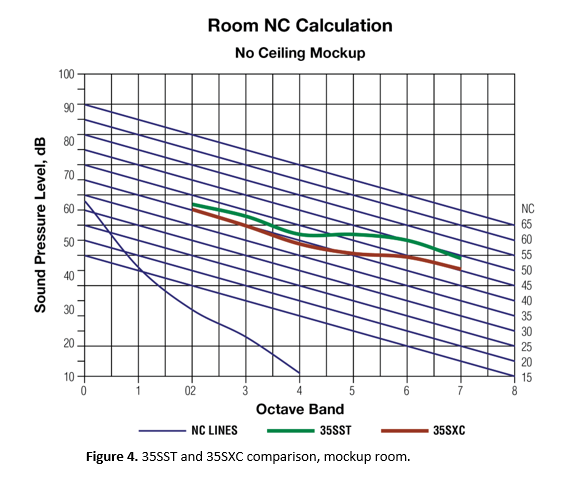 In a standard environment the 35SST could have a similar NC as the 35SXC, but in an exposed ceiling environment, it would likely result in a measured NC almost 5 or more higher. This is typical of most quiet Series (or Parallel) fan box designs. In addition, the data, in this example, results in a RC-42N (neutral) spectra in this mock-up test.

With even the quietest fan terminals, when employed in an exposed ceiling environment, it has been found that the airflow must be significantly reduced to lower the sound generated to achieve desired sound levels. This results in more and oversized units being required to deliver the required airflow to the space. Experience has shown that the actual cost of installing a Series Fan Terminal, not counting the cost of the unit itself, can cost around $10,000/unit when commissioning, DDC controls, piping, wiring, and associated ductwork is considered.

By creating this acoustical signature of the 35SXC, it is possible to use close to the same number of terminals as with a suspended ceiling to deliver the same air quantities to the space. With traditional quiet boxes, the airflow would have to be reduced by 25% or more to achieve the same NC sound levels in the space, adding significantly to the installed cost compared to the 35SXC design. In addition, the room sound level with the XC design will be an RC-Neutral, helping to overcome the “hissy” sound that results with most fan box designs when there is no ceiling to absorb high frequency sounds coming from above the occupied space, allowing for a design of NC=40-45 where an NC=35-40 is more often required to achieve the same “acoustical quality” with a suspended acoustical tile ceiling.

AHRI Standard 885 has a recommended, but largely untested procedure for estimating sound when there is an exposed ceiling. This was part of the standard when published in the late 90’s and suggested that one could treat a radiated sound source as a point source, increase the room volume to account for the now exposed plenum, and input distance and volume in the same manner as a discharge sound source or diffuser.  This technique has been found to grossly underestimate the resultant space sound pressure, as shown in the following graph, likely because it fails to account for the now significant effects of other sound sources in the upper part of the space. It was also noted that the measured space sound levels were from multiple sources in the now exposed plenum suggested that the assemblage of terminal and ductwork tends to be an “area” sound source, not a point source as suggested in 885, making the “distance” parameter in the prediction impossible to determine. In this test, measured NC was found to be 5 NC higher than predicted, and set in the 3rd to 6th octave bands, instead of the 2nd. 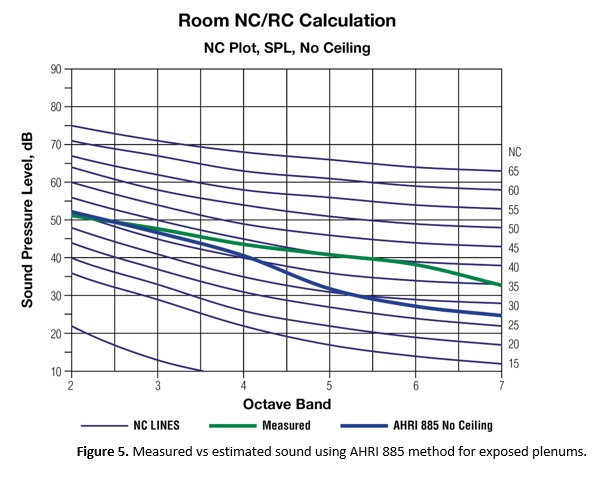 When VAV product manufacturers publish NC values, it has been recommended that the sound deducts used employ “standard” deducts as supplied in Appendix E of the AHRI Acoustical Application Standard 885. If these NC values are shown on the same page as AHRI 880 Certified sound power data, the manufacturer is required to use Appendix E and must state so. 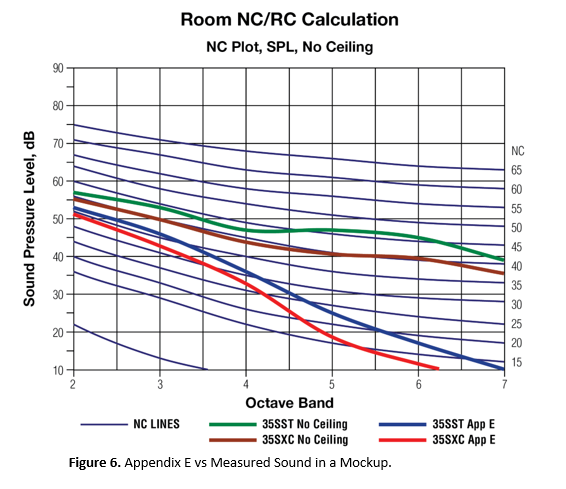 Appendix E is designed primarily as a means for comparing different manufacturer’s sound data with a level playing field. It appears that to do so with the Exposed Ceiling design, this may lead to a serious understatement of the sound levels that will result in an exposed ceiling environment.  As there is presently no industry agreed upon “Exposed Ceiling Transfer Function”, designs for spaces with exposed ceilings may well require mockup data. Issues such as type of ducts supplying and leaving terminals will have to be considered, and even single duct VAV terminals may well have similar issues. In addition, the actual specification for the resultant sound in the space may well need to be revisited, and perhaps the RC rating may again be a better indicator of sound quality than NC ratings.  In any event, it will prove to be a challenge for Acoustical Consultants and Design Engineers, not to mention manufacturers.  The 35SXC has shown to be great leap forward in meeting these challenges.

Everyone involved needs to understand that the exposed ceiling plenum environment differs significantly from the traditional open office with a suspended acoustical tile ceiling. The design requirements are significantly different, and acoustical specifications need to take all this into account if acceptable acoustics are to be found in the resultant spaces. After construction it will be very difficult to make changes to meet the new reality of the exposed ceiling office space.