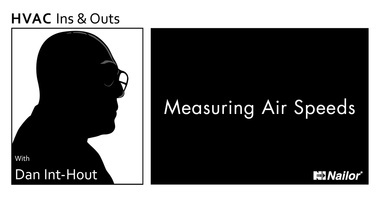 The 1962 Air Diffusion Council Test Code 1062 required that room airspeed measurements be taken with an Anemotherm Air Meter. This was a battery-powered analog highly shielded hot wire anemometer, made by Reeves Hoffman, a sister company to Anemostat, located in Scranton Pa. It was the required instrument in the ADC 1062 test code, which was ”the bible” for air outlet measurements.  It was also the most popular and most readily available instrument for many years. It was, however, not without issues. 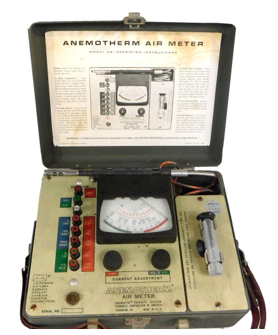 The Anemothern sensor was a wand about ½” in diameter with a couple of looped shielded wires located behind a couple of holes in a tube. In an evaluation conducted as part of the Owens Corning Fiberglas response to a GSA lawsuit on measured air motion in a GSA construction project (which specified 1062 as the method of test), it was found that the Anemotherm was highly directional with a 20º window of accurate airflow measurement. In evaluating several units which had been recently calibrated at the Scranton plant, it was found that with the probe held inside a cup where it should read 0, values of 20 to 70 fpm were observed.  It was concluded that the expected accuracy at low flows was no better than +/- 25 fpm, possibly twice that. 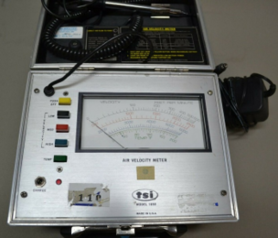 TSI introduced a portable air meter, the Model 1650, in the mid-’70s. It was found that by removing the shielding around the seriously delicate anemometer, it was able to resolve in a 360-degree plane perpendicular to the ¼” shaft, with an accuracy of +/- 5 fpm.  The ASHRAE test standards 72-79, and shortly after Standard 113-90 for room air motion, required this kind of accuracy. The output, however, was quite variable and required some judgment from the operator as to what the actual “mean air was. speed”

Measuring throw (using Standard 70), and later room air distribution (using 113), it has been found that the direction changes as much as the magnitude when low velocities are encountered and that any heat sources in the room greatly affect the air currents developed by an air outlet. The anemometer had to be oriented to the predominant direction of airflow.

This was tiresome, but not a big issue for throw tests with an assumed air direction. It was a real issue for room air motion tests, however.

A true “omnidirectional” laboratory anemometer was developed by TSI in the early 1980s in conjunction with an AD Manufacturer. It made possible multiple anemometers on a ‘tree” that was the averaged at each point.  The result of the new instrumentation, when combined with digital data acquisition and averaging, resulted in throw measurements, especially down to 50 fpm, which were as much as twice what was reported earlier.

Care should be taken when comparing throw data from different sources.  Older data will always report shorter throws than tests conducted with omnidirectional, electronically averaged airspeed measurements.  All the “ADC Certified” throw data (the ADC went away in 1985) was gathered using old technology and is likely going to be reported shorter than more recent tests truly conducted in accord with current requirements. One check on the validity of throw data is to compare current data with data from the same manufacturer from before 1995.  If the throw data is unchanged, it is likely as much as 50% underreported, especially at T50.

Area factors are another measurement that has changed, with the mechanical Alnor velometer no longer available. But that is another tale.