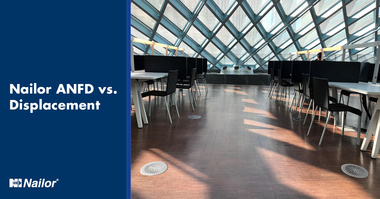 Both Underfloor Air Distribution (UFAD) and Displacement Air Distribution are well defined in the 2021ASHRAE Handbook Applications, Chapter 20, Space Air Diffusion. Generally, the idea for UFAD is to have a well-mixed lower level in the occupied space up to about 4.5 feet above the floor. From the thermocline at 4.5 feet to about 3 to 5 inches from the ceiling is a stratified space. Above the Stratified space, the upper region is the warmest and most polluted air in the room. It is being induced into the return air space or ducts at the ceiling and returned to the air handler. UFAD diffusers are typically designed to mix the space air with the supply air very rapidly to eliminate any uncomfortable areas due to the colder air. Generally, the same amount of air as an overhead fully mixed design is used in UFAD; however, the air temperature entering the room from underfloor is about 10 degrees F. warmer than with an overhead design. Only the bottom half of the room is being treated in these UFAD designs.

Displacement diffusers usually sit on the floor near the perimeter or a column. Very low pressure air is literally poured out of the large face area that serves as the diffuser. This colder air falls immediately to the floor and pools in the occupied space. Heat plumes at warm equipment or people cause the air to rise toward the ceiling. The entire occupied space is a stratified air zone with a warmer air layer at the top of the room as mentioned above. Displacement UFAD diffusers work similarly, except they can be located in the floor in open office plans without ducts. Unlike UFAD diffusers, all displacement diffusers have a defined zone called the “Near Zone” emanating from the diffuser into the space that is not comfortable for occupants due to the lower temperature air. Since care must be taken to not locate people in those areas, this can severely limit the available floor space for occupation.

At least one manufacturer has developed a round floor diffuser that is designed to discharge air outward somewhat horizontally around the perimeter of the diffuser. Turning the air horizontally from the floor diffuser takes a lot of energy; hence, the diffuser exhibits a relatively large pressure drop and limited maximum airflow from the diffuser, typically 50 cfm. The horizontal airflow creates a “Near Zone” and can produce drafts on occupants located near the diffusers. Nailor’s aluminum diffusers (ANFD) are designed to be used as hybrid devices, exhibiting both UFAD mixing and displacement characteristics depending on the airflow through the diffuser. At high flows, they create a thermocline at 4.5 feet above the floor and a fully mixed homogenous zone below. At low airflows, similar to the maximum airflows for the purely displacement diffuser, the vertical projection is very low from Nailor’s ANFD, and they exhibit displacement characteristics with some mixing. The same amount of energy from both types of diffusers enters the space at low levels near the floor accomplishing similar performance. The difference is that the Nailor ANFD eliminates the “Near Zone” of cold air that causes discomfort. This increases the available occupied space.

The Nailor ANFD can be sold as a typical UFAD diffuser or as a displacement diffuser. It is the only one that can be sold as both allowing the occupant to choose which airflow pattern they desire and adjust the diffuser accordingly.