Home » Corporate » News » VAV Diffusers: The solution to some issues but the cause of others?

VAV Diffusers: The solution to some issues but the cause of others? 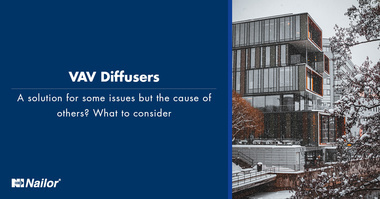 Over-cooling in the summer or over-heating in the winter can impact occupant comfort. There are several solutions for this issue. These include rebalancing the system, adding Terminal Units for those spaces, or adding a VAV Diffuser. The use of a VAV Diffuser requires an understanding of the design, how they work, limitations, and system considerations associated with the product.

If the room temperature is below the thermostat setting during cooling, an actuator in the diffuser will close an integral damper to reduce the airflow. Ultimately, this will result in less overcooling of the space. The diffuser would work in the opposite direction during heating. If the room temperature is below the thermostat set point, the damper opens to increase heating. These devices are pressure dependent. The airflow control is dependent on the pressure supplied to them. They do not affect the overall control of the system.

When the UNI VAV is added to an existing VAV or constant volume system controlled by a thermostat in another zone there are some limitations. Take the floor plan below as an example: 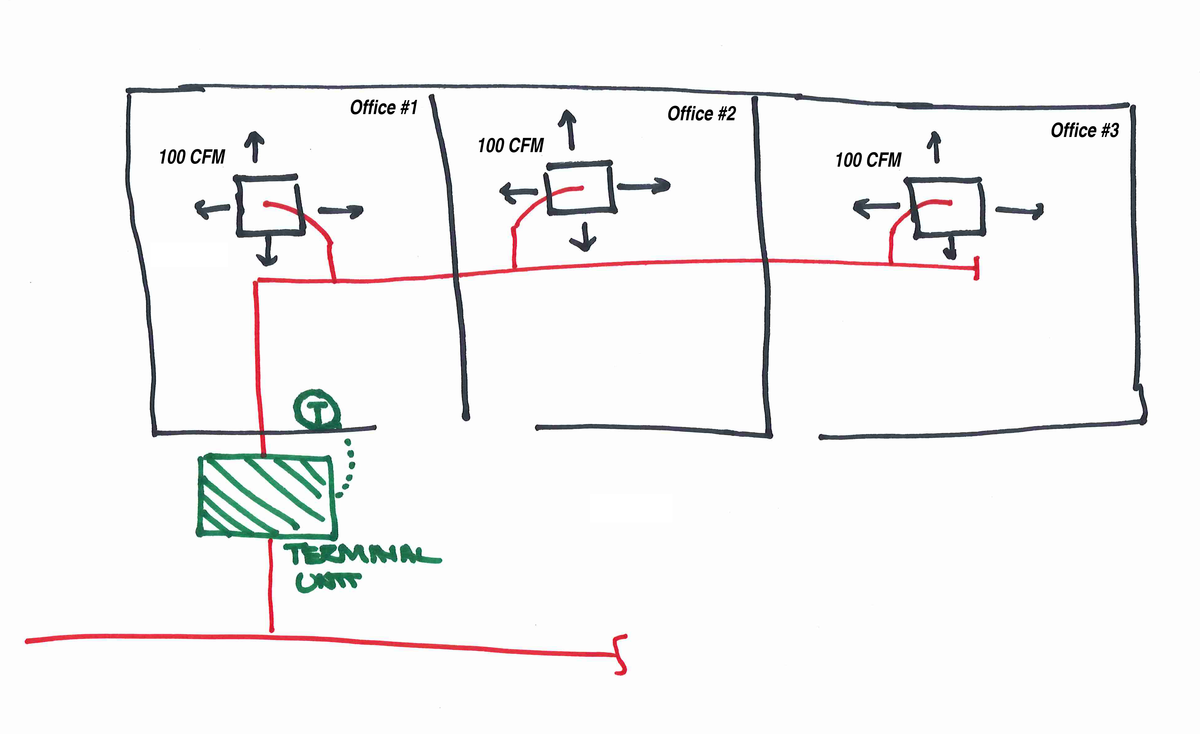 This zone is served by a terminal unit that is controlled by a thermostat in Office #1. The occupant in Office #3 complains of being too cold in the summer and hot in the winter. One option to solve this problem is to move the thermostat serving the terminal unit to Office #3. The deciding factor for this solution would probably be office politics. Which occupant is more powerful? If it is Office #3's occupant, then this would be an acceptable solution. If not, this probably wouldn't fly. In this case, installing a VAV diffuser would be an option. 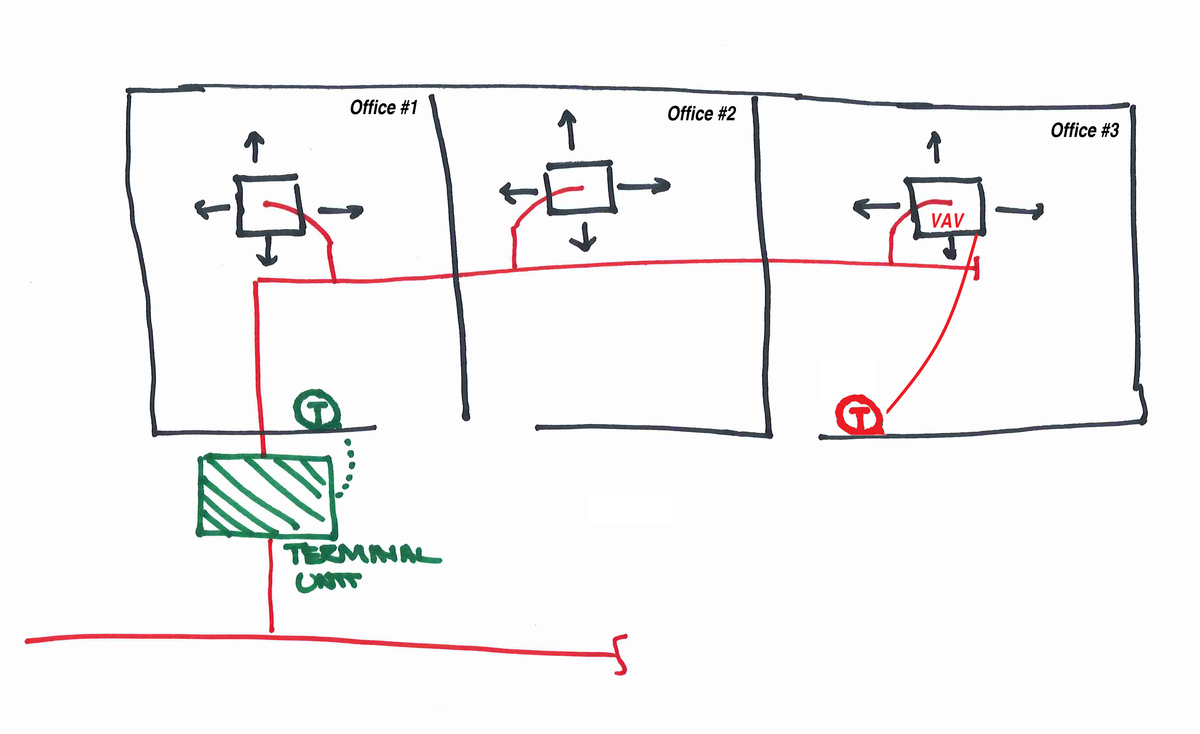 To continue the example, assume the system is balanced so that each diffuser supplies 100 CFM.

If the 100 CFM supplied to Office #3 causes the temperature in the room to fall below the VAV diffuser thermostat set point, the diffuser damper will close to reduce the airflow. As a result, the reduction in airflow to Office #3 would divert to Offices 1&2. Increased airflow could cause Office #1 to be over-cooled, resulting in the damper on the Terminal Unit closing to achieve 100 CFM in Office #1 once again.

Because the VAV diffuser is pressure dependent, the closing of the Terminal Unit damper will cause lower pressure and airflow through the diffuser. Lower airflow could affect the space temperature in Office #3 and cause the damper to open to increase airflow. Equilibrium will eventually result between the Terminal Unit and the VAV diffuser to satisfy both room temperature set-points.

In this example, we've replaced one diffuser in the system with a VAV diffuser. As discussed, even with just one diffuser the system will have to find equilibrium when either the VAV Diffuser or terminal unit change airflow settings. The addition of a VAV diffuser to every office could result in continuous "hunting" by the different dampers, resulting in a chaotic system. One solution to this problem would be to change the operation of the terminal unit to be constant pressure.

Terminal units include a flow sensor, controller/actuator, and damper to measure and control airflow. The flow sensor measures the total pressure and static pressure to determine the velocity pressure of the duct. The controller uses this information to calculate the airflow. With this information, it will modulate the damper to satisfy the set-point in the space. Another way to control the airflow to a zone is to monitor the pressure in the downstream ductwork and modulate the damper to maintain a constant pressure. If the design included VAV diffusers in every office, maintaining constant pressure in the supply duct downstream of the terminal unit. 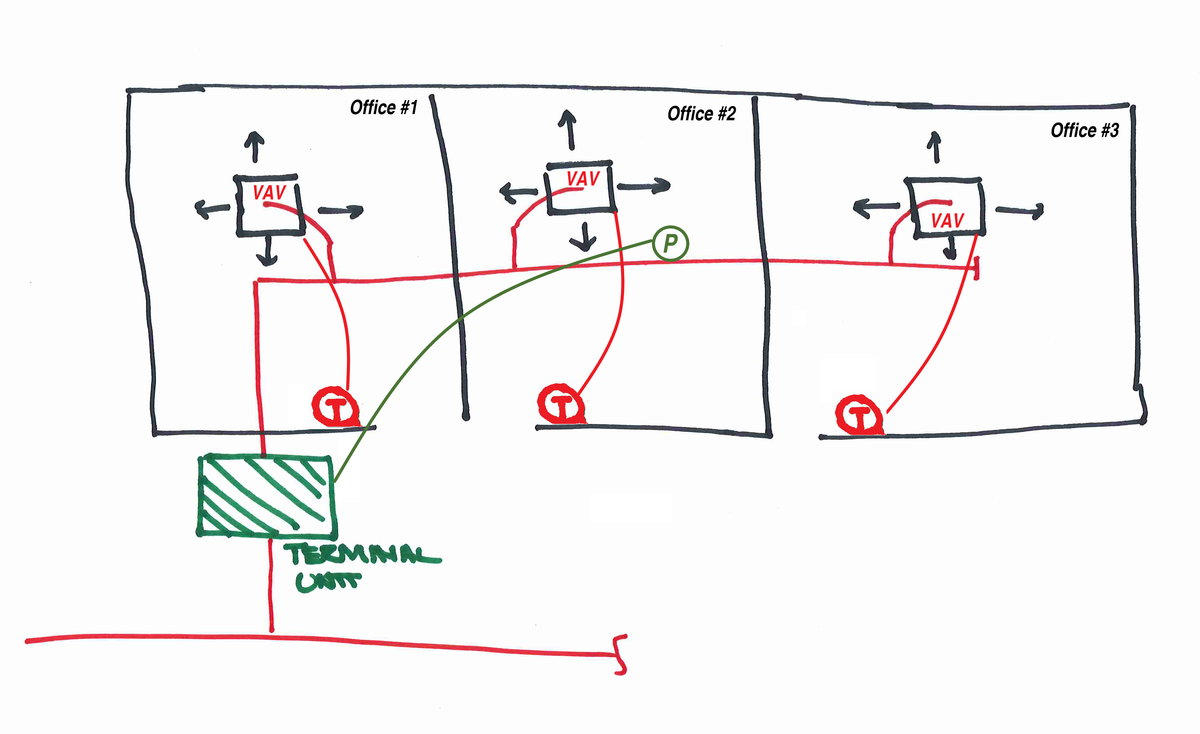 In this scenario, if all three VAV diffusers were wide open each office would supply 100 CFM. If Office #2 became over cooled, the VAV diffuser damper would close. This would increase the pressure in the Terminal Unit ductwork. In response, the terminal unit damper would close (reduce airflow) to maintain the constant pressure in the ductwork. If one of the zones could not meet the set-point with the maximum 100 CFM, the pressure set point could be increased so that all diffusers supplied more CFM. The individual dampers in the VAV diffusers would then ensure their respective zones would not be overcooled/overheated.

All the examples above have assumed a variable volume system (VAV). These diffusers can work with constant volume systems, such as a DX rooftop unit. These units are either on/off controls and deliver constant airflow when they're on. DX cooling coils deliver a constant amount of cooling and rely on this airflow to operate. Using multiple VAV diffusers with a constant volume system could restrict the airflow through the coil causing it to freeze. To combat this issue, the excess pressure in the ductwork must have a method to release using a dedicated bypass damper in the ductwork or a bypass relief collar on the diffuser.

Adding a VAV Diffuser can be a simple fix when an occupant isn't comfortable. However, the information above must be considered to ensure comfort is maintained. If you have any questions about VAV Diffusers or HVAC systems in general, please contact us.