Home » Corporate » News » Square Ceiling Diffusers: What are the Differences?

Square Ceiling Diffusers: What are the Differences? 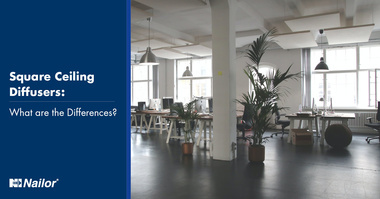 When selecting square ceiling diffusers, many of the options available can seem quite similar outside of appearances. With so many different standard 24 x 24 ceiling diffusers on the market and in Nailor catalogs, engineers could be hard-pressed to find what differentiates each product. The differences, however, can vary from obvious ones like performance and noise to lesser-known variables like throw patterns and specialized applications, all of which can affect the overall comfort in the space.

The Nailor RNS includes three configurations ranging from 2 to 4 cones. For example, the standard 4-cone stamped square diffuser (RNS) is quite similar to the 3-cone (RNS3) and 2-cone  (RNS2) diffusers that came after. If selecting for high inlet pressures, the 2-cone RNS2 is a better option at the cost of higher NC. Besides outliers like this, performance is nearly indistinguishable.

These diffusers increase in price with more cones and are mainly selected based on architectural preference and cost difference. 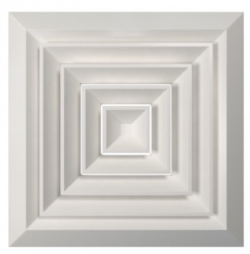 The 6200, 6400, and 6500 series pattern diffusers may look like the round neck diffusers from beneath but are designed around providing maximum performance with high airflows. These diffusers feature angled vanes instead of cones, which affords less obstruction to the supply air. These vanes generate longer throw distances and result in a cross-shaped throw pattern in the basic 4-way configuration. They are highly customizable and come in a wide array of vane and throw pattern arrangements.

The UNI and UNI2 diffusers and their aluminum counterparts differentiate themselves from the original square diffusers with a more minimalist design and construction. 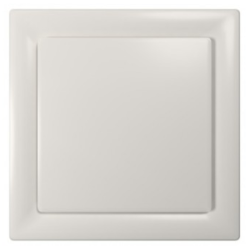 Using concealed bracketry and a nearly flushed flat plaque face, the UNI and UNI2 offer a clean look that blends in nicely with the rest of the ceiling.

Despite using a square metal plaque to distribute air instead of the gradual slope of cone diffusers, the performance of the UNIs is similar to the RNSs at the most popular 8" and 10" neck sizes, and their throw is markedly better at larger sizes:

While the UNIs are nearly identical, the newer UNI2 model's base price is roughly 20% cheaper than the UNI. However, the more expensive UNI offers additional frame type options such as tegular lay-in or spline frames. 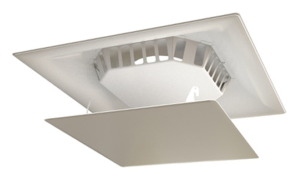 The UNI2 also features plaque bracketry closer to the edges of the diffuser, allowing for specialized versions. Utilizing the extra space in the diffuser, an induction chamber can be built inside, resulting in the UNI2-HI. This model promotes higher room induction and mixing by channeling the air through the added basket. While most baskets in the industry provide 4-way throw, Nailor baskets deliver 360-degree throw due to their octagonal design. The UNI2-HH is another specialized model, built with added foam insulation to prevent condensation in high humidity environments.

The UNI2-VAV is another diffuser that utilizes the extra space inside to add a controlled actuator for regulating the supply air into the room.

With these diffusers, variable air volume (VAV) functionality can be achieved in a localized area without the need to install a full-fledged VAV system. More info can be found in our UNI2-VAV article.

Besides the UNIs, perforated diffusers are another good square diffuser option for architectural ceilings. Because the supply and return models both feature a perforated face, they can be integrated into the ceiling grid to create a flushed, flat appearance. These models (4310, 4320, 4330, 4340, and 4350 series) also offer a range of throw pattern options, from circular or square patterns to modular controllers.

If customizable throw direction after installation is important to your project, then modular core diffusers (7200 and 7500 series) are another great prospect. 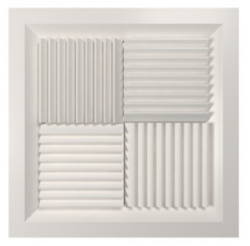 These diffusers feature four spring-loaded pattern controllers that can be easily removed and adjusted to provide any discharge pattern in the four directions.

Choosing the right ceiling diffusers for your project’s needs is an important step in ensuring proper coverage and comfort. Understanding the differences between these products will not only save you time and money but also result in a better building for your occupants!